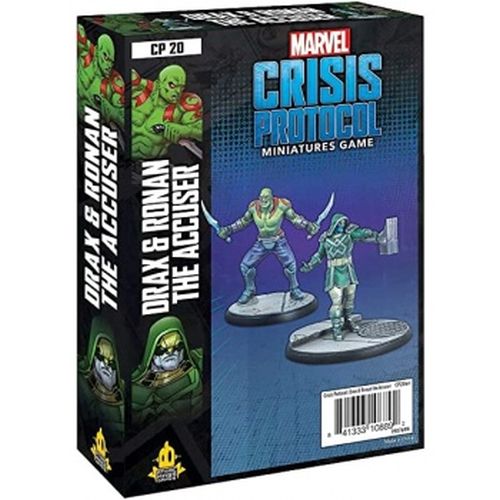 Marvel: Crisis Protocol: Drax and Ronan the Accuser allows you to add two new characters to the Marvel: Crisis Protocol miniatures game. Created by the Titan god Kronos to kill Thanos, Drax the Destroyer has spent most of his existence trying to do exactly that. Despite this one underlying purpose, Drax has fought to save the universe time and time again. Following his efforts to stop the Annihilation wave, he joined the Guardians of the Galaxy, and he continues to fight to protect the innocent and pursue his quest to slay the Mad Titan Thanos. As the Supreme Public Accuser of the Kree Empire, Ronan serves to deliver Kree judgment and justice across the galaxy. Stern and uncompromising in his application of Kree law, Ronan has fought both with and against many groups. Armed with his Universal Weapon, Ronan has proven himself a threat rightly feared by all who dare cross the Kree.