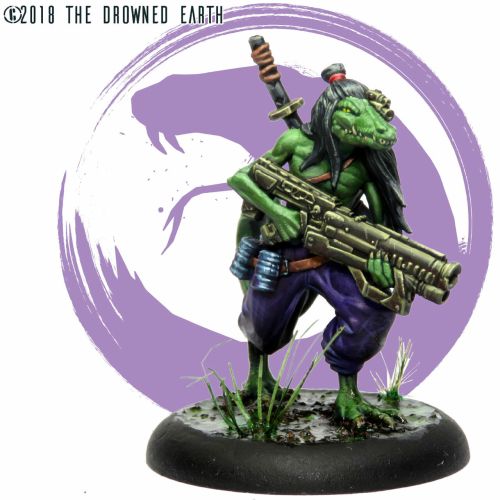 How Lakassk ended up with the “misfit crew” is a question he constantly asks himself. By the standards of the rest of them, he’s actually quite sane. It’s probable that, considering their reckless nature, Lakassk was seen as a tactical necessity: His Nova Cannon is certainly not the most subtle of weapons, but it’s definitely a useful one. Firing flash-bang grenades, Lakassk is capable of shoring up even the most reckless of charges with a covering fire: and considering the Firm’s general eschewing of heavy armour, that’s a boon indeed.

Not, of course, that Kaneda has any awareness of this fact whatsoever. As usual his arrogant self-obsession means he gives Lakassk no credit for saving his over-privileged behind time and time again. This fact grates on Lakassk about as much as one could expect, but it is Lissz’ appreciation he truly craves.

There too, unfortunately, he is unappreciated. Lissz is stealthy enough not to need his protection, although sensible enough to recognise his important role within the crew. Whether she notices and ignores his romantic advances, or is oblivious to them, is something Lakassk spends far too much time thinking about.

Lakassk, Firm Mech is a multi-part metal wargaming miniature in 35mm scale. The model is lead free, and comes supplied with a 30mm base and profile card.