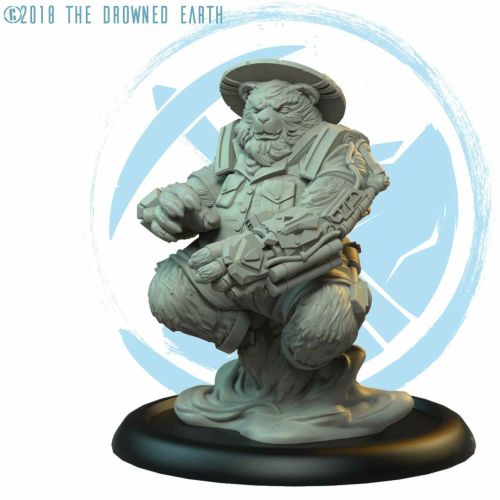 In his day, Alophangus Playdge was a famed explorer and Artefacter. Few in Ulaya are as well travelled, have seen as much, and know as much about the world as Playdge. Some say he could have risen right to the top of the Artefacters, but instead, with age, he retired from his adventuring and settled down at the Obelisk Research Facility, where he works on reviving old computer databases, and learning as much as he can about the world of the Builders. But the wanderlust has not disappeared completely. From time to time he leaves his assistants and researchers, and goes out in to the field himself, leading a band of Artefacters on a mission… probably of his choosing. He can be seen wearing several prized pieces of ancient technology- an exo-suit, and a blink field. The exosuit allows him full and free movement and athleticism, despite his advanced age, while the blink device allows him to disappear and re-appear a few steps away… when it is in good working order, that is! While he clearly loves both research and field-work, rumours are abound that Playdge is a senior member of the Order of the New Enlightenment, but he, naturally, denies it.

A dedicated, and inexpensive, support piece. Highly mobile and evasive with his unique “blink” exo-frame, Playdge helps obfuscate and protect other Artefacters while grabbing objectives.

Playdge is a multi-part metal wargaming miniature in 35mm scale. The model is lead free, and come supplied with a 40mm base and, Leader Ability and profile card.